Pointer Shadow Re-enabler is an application that periodically re-enables mouse pointer shadow if it was disabled. It is useful in those situations where a application or game disables Windows pointer shadow and neglects to enable it back once it's closed. Dota 2 is an example of game that does this.

After installation the mouse pointer shadow will be periodically enabled at user set times through a task created in Windows Task Scheduler.

Pointer Shadow Re-enabler is lightweight and there is no measurable performance impact when it runs.

Below a screenshot with the install options: 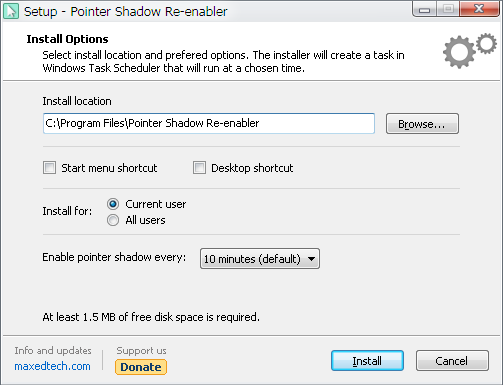 If you find the application useful and want to support us you can do make a small donation (min. $3 due to processing fees) here.

1. How to set different settings?

Launch the installer again. Previous configuration will be overwritten with the new settings.

2. Does silent or unattended installation work?

Silent installation is partly supported through the use of /SILENT or /VERYSILENT flags and will install with default settings. In a future version an unattended configuration file might be supported.

3. My antivirus says that the installer or one of the contained files is a virus or trojan.

Unfortunately these days, antivirus companies classify anything new as malware/trojan/virus especially if the software isn't digital signed (which is costly). The process of fixing the false positive detection for each antivirus vendor is a lengthy one and problematic. Some companies like McAfee and TrendMicro, refuse to correct the false positive detection despite being provided with the files and explanation of what they do, even worse, you can't even speak with someone to reconsider their classification. Microsoft's Windows Defender, will keep flagging the files as malicious for weeks after they were submitted as false positives and their online scanner and their analyst classify them as non-malicious.

If you’ve downloaded the files from the official links then the virus warning is a false positive. While it’s highly unlikely that the installer would be compromised and be infected with viruses, if you really want to be sure then you can submit the driver package for analysis to www.virustotal.com for a wider analysis.

Useful for:
Donation notice
Was this helpful? Please consider supporting us by making a donation.
AdSense